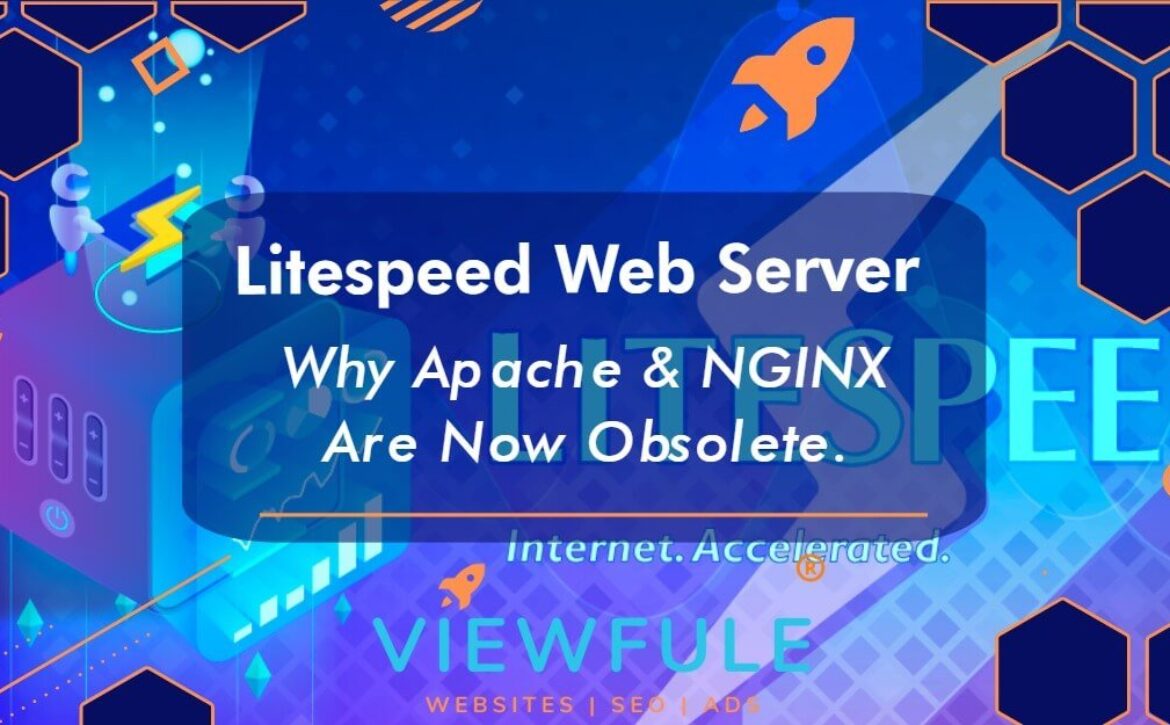 Litespeed Web Server – Why Apache and NGINX Are Now Obsolete

First of all, what is a web server? In plain language, a web server is a computer that stores, processes, and delivers website files to web browsers. Web servers consist of hardware and software that use Hypertext Transfer Protocol (HTTP) to respond to web users’ requests made through the internet. Through this process, web servers load and deliver the requested page such as Google Search to your web browser. This browser could be Google Chrome, Mozilla Firefox or Microsoft Edge for example.

There are many different types of software that make a web server work. But the most common software is Apache. It runs 39% of the top one million websites in the world. Followed closely by NGINX (pronounced Engine X) at 32%, Cloudflare Server comes in third at 14%, Microsoft IIS in fourth at 8% then we have close behind at 6.5% – Litespeed. It’s that last one, but by no means least, we’ll be focusing on in this article and why we believe it won’t be long until it takes the top spot and why it matters to you.

Litespeed Web Server, abbreviated as LSWS, is almost a newcomer to the web server ‘scene’ having been founded in 2003. Over the last 19 years, LSWS has gained a vast, perhaps even cult-like, following among web hosting companies due to its efficiency. With its streamlined ‘event-driven’ architecture, companies running LSWS could, in theory, double the maximum capacity of the websites on their servers if they switched from Apache.

Imagine if you are a web hosting company with 40 servers running Apache and each server could host 400 websites. The maximum number of websites you could host theoretically is 16,000. But then you hear about this technology called Litespeed Web Server that could double your hosting capacity to 32,000 websites… just by installing it. Wouldn’t you be tempted? The web hosts certainly were and that’s why LSWS is now the fastest growing web server technology on the planet.

Now that you know what a web server is, a few of the alternatives and what Litespeed can achieve for the hosting business. Let’s focus on how it can benefit you, the consumer. Those web hosting companies didn’t just choose Litespeed technology purely for the capacity benefits. They chose it for the performance advantages the technology offers too and let’s be honest, everyone loves a fast website so it’s an easy sell. We’re going to provide some examples of how much faster Litespeed web server is when used with the most common website platforms.

To keep things as fair as possible, all platforms will use recommended caching technology where possible and the performance comparisons will be based on Requests per Second, or RPS. Using the RPS for this comparison is sensible because it’s a key performance indicator that accurately measures the throughput of a system. This is why it is commonly chosen to measure the performance of a web server – throughput is vitally important.

How much faster is Litespeed with WordPress?

In order to use Litespeed with WordPress, a plugin is required. This is called LSCache and it’s available free of charge from the WordPress plugin directory. It takes some time to configure and isn’t as easy or as fast to get up and running as say, WPRocket. But once it’s ready to go – it can’t be beaten. Here is a direct comparison of the same WordPress website running on all three web servers.

No contest was it? Even though NGINX shares the same architecture (both event-driven) and therefore has much more in-common with Litespeed than Apache. Litespeed still blew it away by up to 12x. Apache was left in the dust, it just can’t compete and was beaten by up to 84x. If you are running a WordPress website on an Apache web server in 2022, it’s a no brainer, you need to switch to Litespeed. This doesn’t even factor in the performance gains from upgrading to HTTP/3 QUIC – Litespeed web server was the first to embrace this new technology and the following comparison was only for HTTP/2. 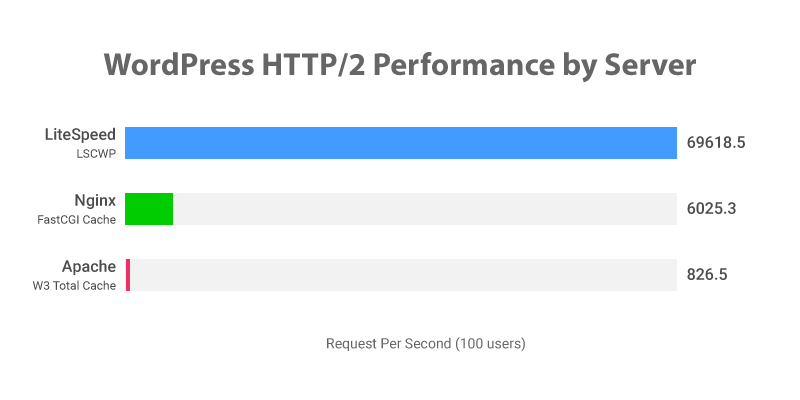 How much faster is Litespeed with Joomla?

In order to use Litespeed with Joomla, a plugin is required. It’s available free of charge for Joomla 3 and Joomla 4 directly from the Litespeed website. The implementation is much the same as for WordPress – it takes time. But once its ready to go, nothing else compares.

Once again we see huge gains in requests per second. Litespeed simply dominates by being able to handle up to 428x more requests per second than NGINX. Apache once again, is left behind. What’s clear is if you are running Joomla, migrating to Litespeed is well worth your time. Brands such as Roger Federer. Pro Beauty Medical Group and How Am I Going? all use Joomla powered websites.

How much faster is Litespeed with Drupal?

In order to use Litespeed with Drupal, a plugin is required. It’s available free of charge for Drupal 8 and Drupal 9 directly from Github. Installation is much the same as for WordPress and Joomla, it does take time to configure and optimise. But once it’s complete – nothing beats it.

In the example below Varnish has been used as the server caching technology of choice for NGINX and Apache. But even then, they don’t come close. Litespeed can handle up to 6x more requests than NGINX. Interestingly, Apache isn’t quite so far behind with Drupal than it is with Joomla. This is most likely due to efficiencies with the architectures integrating well together. Brands such as Tesla, UNICEF and Nokia all use Drupal powered websites. 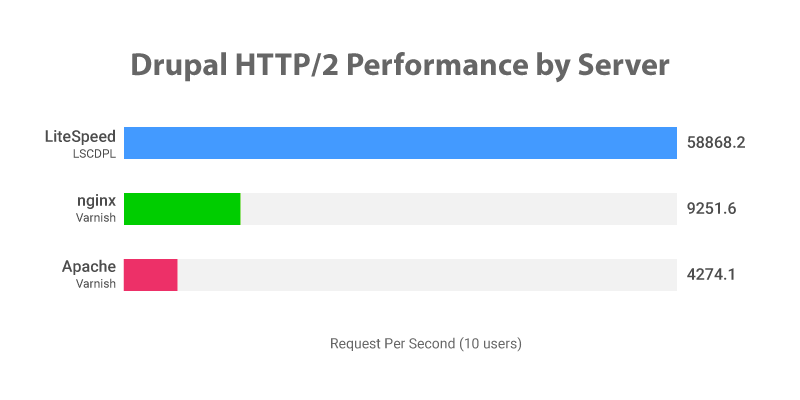 How much faster is Litespeed with Magento?

In order to use Litespeed with Magento, a plugin is required. It’s called LiteMage and it is available for Magento 1 and Magento 2 directly from Litespeed. Unfortunately it is not free and costs $2500USD per year – not exactly a bargain. But this does include support, updates and some installation advice.

Migrating your Magento website to Litespeed is definitely worthwhile though, costs aside. Up to 3x more requests per second can be handled and if you’re running a multi-million dollar online store such as the Brands Liverpool FC, Landrover or Nespresso (which are all Magento powered) – what is $2500USD to them really? Peanuts. 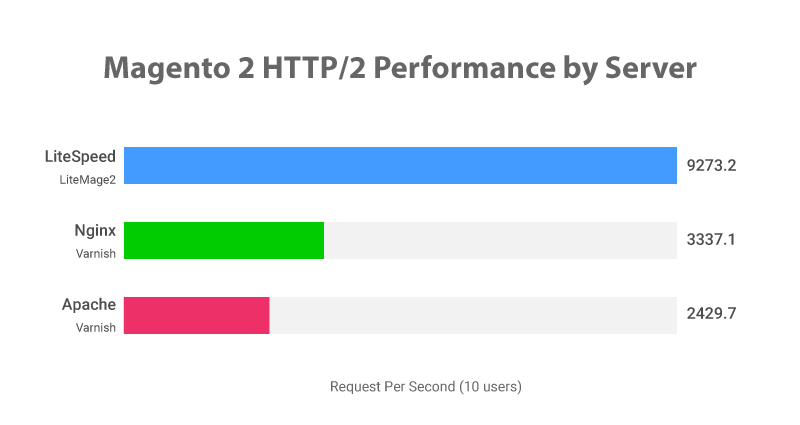 At VIEWFULE, we encourage all our clients to choose web servers that are powered by Litespeed Technology. Your website will load faster if you do. All of the major website platforms experience an increase in performance. From the test results above, the gain can vary anywhere between 3x and 428x in requests per second. But there are other website platforms that can benefit from Litespeed too. Laravel, PrestaShop and OpenCart can all work with and benefit from Litespeed Web Server. If you would like to implement Litespeed on your website, reach out for your FREE consultation and we’ll talk you through it.